I would like to give an honest write-up of my experience, just as others have taken the time to do. Hopefully it will perhaps inspire some people, clear up some misunderstandings for others, or at the very least be a little interesting.

First, a little of my background for context… I’m Marc, a Chen Taijiquan teacher from the South of England, I am 36 years old (37 this month :-S), I began training Chinese martial arts just before I was 16 years old with Wing Chun, which continued for 8 years.

2 years into that training I also began learning Taiji – Yang style. I began with a Caucasian teacher of both Wing Chun and Taiji, but within a couple of years began learning from his teacher, Li Xuelong, a highly skilled Chinese guy that lived within an hour’s drive from me. He taught yang style in group classes but was primarily a Chen stylist, that had learned from Tuo Musi (student of Chen Zhaokui – the guy in the black & white push hands photos going round the internet). I began learning Chen style with him around 2000 / 2001 alongside my Yang style, but Chen gradually took over and I had given up Wing Chun and Yang style Taiji by 2004.

In 2005 I met and began learning Taijiquan from Liu Yong, senior disciple of Chen Zhenglei. So for the last 12 years I have been training hard and developing that style.

I’d known about Marin since around 2014, but about a year ago, I began chatting with him via facebook messenger and told him I’d like to learn from him. He was extremely reluctant to take me on as a student, as I was already a well-established teacher of CZL/LY line and I guess he thought I would learn gems from him, add them to my repertoire, and claim that I’d learned them from the revenue-generating Chenjiagou lines.
I took the time to make friends and it took a long time to convince him of my humble intentions!

I arrived in Boston on the morning of Friday, April 27th. Marin was nice enough to take time out of his day to come pick me up from the airport and take me for lunch, then to my accommodation, within walking distance of his home. 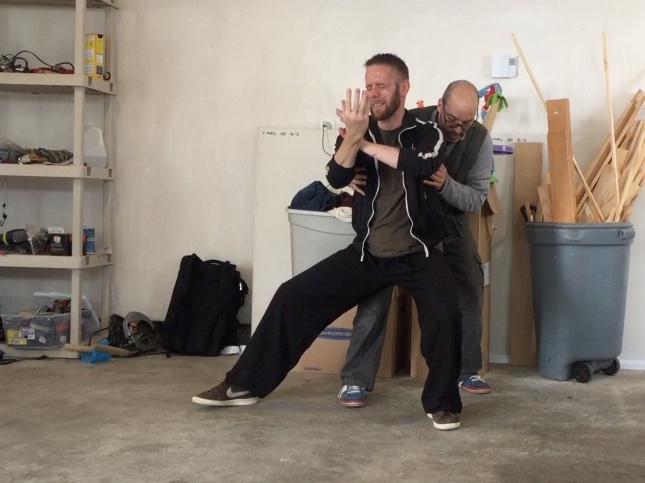 That same day, he began teaching me his Taijiquan with some jibengong (basic exercises).
Within minutes I came to understand how much more difficult his Taiji is than the modern Chen village lines.
I have trained CZL line for 12 years – a lot of which was in very deep, low stances and quite slow…
For example, ‘Laojia yilu 74’ in my Academy takes 45 – 50 minutes. Not the easy 15 mins most people train it in. But within 5 minutes of Marin’s basics, I was sweating my tits off, grimacing and grunting in pain. Initially I wondered if I was going to be able to get through the week,
but I was determined to persevere.

I’m glad I did because it got easier to handle psychologically (although not much easier physically) as the days went on, and I made some fairly good progress in the short time I was there. Towards the end of the trip I was certain that I wanted to continue with this practice.

Now, I know many people train the village styles hard, and if trained deep, low and slow, (as I have) it is challenging… BUT, it is just NO comparison, regardless. The entire method and structure to be adhered to in Marin’s system is the most difficult Taijiquan I have ever trained and those that haven’t trained both will not understand the differences. They are massive but very hard to see if you don’t know the exact mechanics of the style. It’s not my place to clarify exactly what these are but I can and will assure anyone out there that although the choreography may look similar to the Chen Village “Xinjia”, the mechanics of it are not the same.

I was pleasantly shocked at the high level of Marin’s close range martial art skill. Bear in mind I am not an easily impressed beginner, I’ve spent 20 years on Chinese martial arts. He showed the usage of many of the movements in his 83 form, and on some I actually felt in serious danger. His gongfu is not only nasty and devastating, it functions in a way that uses leverage and timing to achieve maximum result from minimum effort… a concept that other systems only pay lip-service to.

His techniques are extremely efficient and directly from the mechanics of his form… unlike many lines of Chen, that practice a comparatively simple form but do something entirely different when they fight (Sanda or Sport Shuai Jiao for example), and claim it’s still following ‘Taiji principles’. Everything Marin practices for combat is a direct result of the skills built in each little detail of his form and training drills. It is a system with actual techniques, it does not need to borrow from elsewhere.
When demonstrating applications Marin shows restraint, and a light-hearted attitude throughout.

The video that was recently posted of me helping him to show some applications in the park was nothing compared to some of the things he showed in private. As I was a willing volunteer, I got to experience that many of these applications were nasty and hurt like hell even when he was going real light.

He can play and easily defeat people at the Chenjiagou modern wrestling style of push hands but only for fun. If he turns up the heat, his array of effective techniques is astounding. Seriously, believe me when I say he CHOOSES not to show too much online. I have good reasons to doubt this is the case with most other Chen teachers.

I will also mention that I observed his close students practicing and was very impressed at their gongfu as well. It is a rare thing to see… a testament to his teaching but also a huge testament to their efforts in training. Some had done 10 years with him and were excellent but even one of Marin’s 3 year students I met has developed some impressive skills in this art.

Marin is not only a highly skilled martial artist at a level most will not reach, but also an excellent teacher that knows just how to guide students through his clearly laid out Gongfu system with a lot of patience.

Now, Marin as a person…
I had an absolute blast while I was there. Marin is kind, generous and is naturally a joker. His comical impressions of rough Boston local’s accents, or even Beijing airline stewardesses accents had me nearly pissing my pants. Although from my perspective, his British accent impressions sound way too posh.

He invited me for dinner, and over a couple of drinks of Baijiu, told me many stories that enlightened me to certain things about gongfu culture and the Taiji community in general. He was such a gent, he gave me a ride home when it was raining and even drove me to Boston airport on May 7th when I left.

The negative impression that some people have of him is a shame. Because of online debates etc, many think he is arrogant or just a keyboard warrior. He is neither of these things. He is a very down-to-earth guy despite having the skill level most would consider a Master, if they actually experienced it firsthand. I used to think some of the same negative things as others but what changed that was a combination of things… firstly I opened my mind to the possibility I could be wrong, I researched to understand his level of training and skill, I approached him with some humility, not like an ignorant asshole.

Taiji enthusiasts wouldn’t dream of talking to the Chinese teachers of Marin’s generation (for example Chen Bing, Chen Ziqiang, Wang Zhanjun etc) the way they do Marin, yet I believe his skill level is FAR higher. People seem to think being Chinese or a Chen guarantees higher skill but this is definitely NOT the case!

He is a straight-shooter and will not entertain bullshit. Unfortunately many that approach him are full of illusion and misunderstandings, but worse, an arrogant sense of ‘status’ or entitlement. THAT is usually where the conflict comes from. Unlike many, he can BACK-UP what he says, and unfortunately, when someone of his skill tells the truth, it is going to sound arrogant to those that don’t understand where he’s coming from.

Marin is not on a mission to build an empire. He is not interested in teaching hundreds of half-clueless, arm waving sycophants that will make him a multi-millionaire, you’ve only got to sit and chat with the guy to realize how humble and down-to-earth he actually is, despite how it may seem in online dialogues.

He is interested in expanding a bit but only if the circumstances are right, and if people are prepared to put in the hard work his system takes – which would be about 1% of the Taiji community. Marin does not compromise just to make money. Now THAT is integrity. Now at age 46, he has just a handful of official disciples / indoor students, but I will also add that they are all good friends, not money bags to him.

In contrast, the last time I checked, Liu Yong was mentioning on WeChat / Weixin that Chen Zhenglei has over 600 “disciples”. Yeah, that’s right. “Disciple” is now completely meaningless in the commercial Taiji scene… it is literally just a money-maker, and a HUGE one at that. I’ll leave that subject there, before my rant picks up more momentum.

So that was my first experience training with Marin Spivack, and I will be working my butt off at what he taught me, and will definitely be going back in the future.

Now, I have given a lot of praise but please do not misunderstand. This was not me kissing Marin’s ass, this was genuinely my experience. Kissing ass is not what I am about.

I hope some found this interesting, and possibly a little inspiring. If not, you literally don’t know what you’re missing